HYDE SQ.–Whole Foods Market opened to brisk business on Oct. 31 at 413 Centre St. after months of controversy about the grocery store chain’s arrival in Jamaica Plain.

Whole Foods replaces the shuttered Hi-Lo market in a revamped building. The store will be open daily from 8 a.m. to 10 p.m. Its street address has been tweaked from the original 415 Centre St.

The new grocery store features a bright, colorful interior studded with informational signs. It has adopted the building’s 1950s-era clock tower as its signature.

The clock tower is representative of the “Googie” style, also known as 1950s Tiki, Space Age or Coffee Shop Modern. The store has adopted the aesthetic inside the store, with tell-tale boomerangs and oblongs painted all over the walls.

The name Googie comes from a coffee shop in West Hollywood, Calif., which exemplified the style.

A large sign near the restrooms educates shoppers about the mid-20th century style.

Whole Foods has also started an “ethnic foods” section in its store. At the time of a press preview tour on Oct. 29, that section included various types of rice and beans in about four feet of shelf space.

The murals on either side of the entrance have also been recently restored by the City of Boston’s Mayor’s Mural Crew, Licht said. (Gazette Photo by Rebeca Oliveira) The front of the new Whole Foods Market at 413 Centre St. as it looked two days before its Oct. 31 opening. 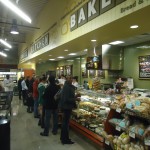 (Photo by Patrick E. O’Connor) Customers line up at the counters inside Whole Foods Market at 413 Centre St. on its opening day, Oct. 31.

5 comments for “Whole Foods Opens Its Doors: Customers line up”